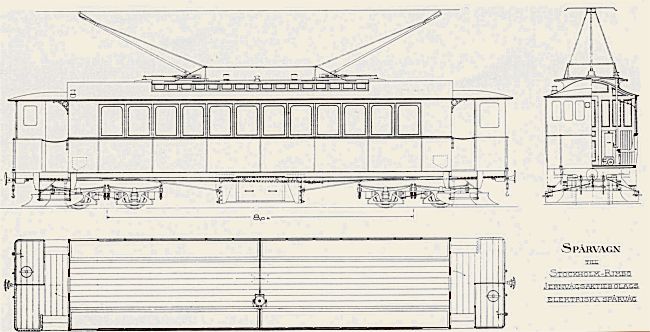 Drawing of SRJ "Tram # 1" as it was supposed to appear when delivered in 1893. Original drawing after restoration by Mats Dahlström ©.

On May the 15th 1895 Djursholmsbanan opened its electric operation as the very first publicly operated electric railway in Sweden. The same day it also opened an extended line from the main terminal Stockholm Östra to Engelbrektsplan close to the very centre of Stockholm. This extension, known as the "Train in the street", was used until 1960 and here the electric trains literally were mixed with pedestrians, cars, bicycles and trams on the streets of Stockholm.

The electrical system used was 600 V DC, much like a tram line. A power plant was built near the docks in Stocksund, where coal was burnt in two boilers and three steam engines of 90 - 120 hp each connected to the generators. The electrical equipment including the three generators, the overhead wire and traction motors and control equipment for four electrical "trams" was delivered by Mather & Platt in Manchester. The "trams" themselves were completed by Atlas in Stockholm. The equipment was delivered already in 1893, but the original traction motors were too weak for the trams. Another problem was that the power from the power plant was not sufficient to keep all trains running at the same time. It took about 1,5 years to sort these problems out before the service could begin.

In 1898 Rimbo - Sunds Järnväg opened a new line from Rimbo north to Häverösund. SRJ was a major shareholder and operated the line with its trains from day one. The line was extended to Hallstavik in 1915. Another line operated by SRJ from the beginning in 1901 was Södra Roslagens Kustbana, SRK, from Roslags Näsby on the SRJ main line east to Åkersberga. The line was extended to Österskär in 1906.

To connect Dannemora - Hargs Järnväg up north with the rest of the three foot system in Roslagen, plans were made to build a connecting line from Faringe to Gimo. This line was built with great financial difficulties during the first world war. SRJ and DHJ owned half of the shares each in Faringe - Gimo Järnväg, FGJ. The line was eventually opened in two steps in 1920 and 1921, and was then operated as a branch line by DHJ.

Stockholm - Rimbo Järnväg, SRJ, started to aquire neighboring lines already 1892 when SRJ took over Djursholmsbanan, DjB. One after the other the three foot railways in Roslagen was included into SRJ - totally or partially owned. By 1908 SRJ operated a network four times as large as the original line from Stockholm to Rimbo. It included the line from Uppsala via Rimbo to Norrtälje, the line from Rimbo to Häverösund as well as from Roslags Näsby to Österskär. Thus from January 1st 1909 the name was changed to Stockholm - Roslagens Järnvägar, still with the abbreviation SRJ.

Already 1909 the first talks of a merger between DHJ and SRJ was held. However, DHJ continued as an independent company until 1925, when SRJ acquired all the stocks in DHJ (and with that also the remaining stocks in FGJ). With this SRJ finally owned and controlled the entire narrow gauge network in Uppland.

Around the turn of the century the traffic closest to Stockholm expanded rapidly. The long haul trains to Rimbo and beyond had to compete with the electric trains to Djursholm on the single track line. To expand the capacity SRJ applied already in 1896 for the right to double track the line from Stockholm Östra to Djursholms Ösby. The right was granted, but only on the condition that the second track were laid with standard gauge!!! For obvious reasons SRJ withdrew the application. By 1903 SRJ learned that they might be more successful if they were to apply for "longer meeting tracks" between Stockholm Östra and Ösby. The first permit was granted in 1904 and the first part of the double track was put into service in 1906. By 1909 most of the track up to Stocksund and the bridge across Edsviken was doubled. The bridge was to remain a single track needle eye until it was replaced by a new bridge in the middle of the 1990ies.  By 1915 the double track was extended from Stocksund to Danderyd (now Djursholms Ekeby).